Hello! We are Artel "W" Miniatures - group of artists, sculpters and designers, mostly from Russia, producing collectible resin miniatures for wargames, tabletops and RPGs. Our motto is: "Awesome miniatures for awesome people!". So - welcome, Awesome Ones, check what we made for you and your games and collections!

We accept payment via Paypal only. All orders from $300 and above comes with 25% of discount (applying automatically in checkout). We ship worldwide by Russian Post. Delivery cost is $9-11$ per order, for orders from $100 and above delivery is free. Usually order processing takes about 1-2 weeks, delivery about 2-8 weeks. For new products and some popular products, processing may take longer, if you need the goods urgently or at a certain time - please contact us.

Artel “W” Miniatures is a small but proud company from Russia that produces miniatures for tabletop wargames, RPGs - and collecting, of course. We are the team of artists, designers and casters working together for the common goal which is to make our resin miniatures full of character and thoroughly detailed. Although the company was established just two and a half years ago, we have by now released quite a lot of minis and sets warmly accepted by the community from around the world. Artel “W” Miniatures has always been driven by the strongest intention to produce awesome miniatures for awesome people. We are striving to breathe life and personality into our creations to make them special - either in a game or on a collector’s shelf. 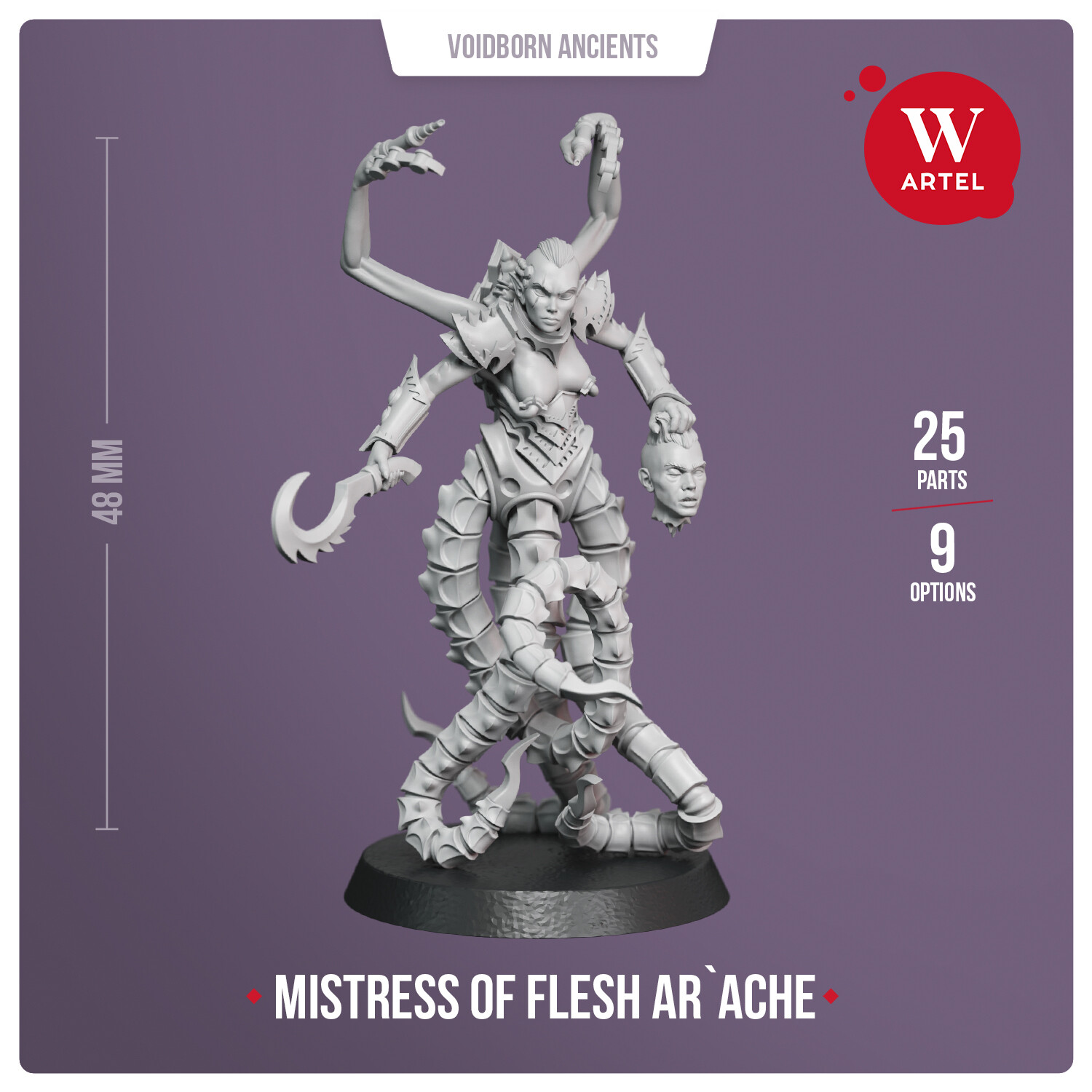 The race of the Ancients was once the greatest power in the galaxy. Now they are merely a shadow of erstwhile mightiness… but the greatest dangers are lurking in the Shadow! The Ancients called Voidborns wove their gloomy lair in Tenebris, the World-between-Worlds where eternal twilight reigns. Possessing the mystical powers of the everhungry Void, these decadents are paying for power and immortality with eternal unquenchable hunger, endless thirst for blood and souls. Their life is a twisted symphony of pain and pleasure, violence and lust, performed on countless myriads of souls. For a Voidborn, everything and everyone but himself is only a thing, a toy or a food.
Fleshmasters (and Mistresses) are feared and worshipped all around Tenebris, as there are no knowledge of flesh, no secret of blood, no mastery of bone unknown to them. They sculpt from living flesh, as from obedient clay, granting immortality, power and ability… as well as pain, madness and endless suffering. Their services are expensive, but beware of causing Fleshmasters' anger, for their revenge will be terrible. In battle, they command legions of nightmare creatures, spawn of their blasphemous experiments… but the Masters themselves will not yield to any enemy.

Mistress Ar`ache is known as Lady Venom - poisons, toxins, enzymes and acids have always been her passion. She turned her body into a chemical factory, with implanted glands producing most complex nameless compounds that Ar`ache uses for her works, battles… and pleasures.

Miniature for wargames, collecting and role-playing. Consists of 25 parts, including numerous options.

Miniature is unpainted, unassembled, 25mm round base included.

Save this product for later